She was our first director and continued in that role for more than 30 years. Without her, there would have been no Red Mask, no theater, no children's plays, no benefit performances, no organization.  Her legacy was that "the show must go on" and it has without interruption since her death on March 5, 1968.

It is fitting that the theater, the realization of her dreams, bears her name.  And it is at once consoling and inspiring that her portrait in the lobby smiles upon those who come through the big red street doors. 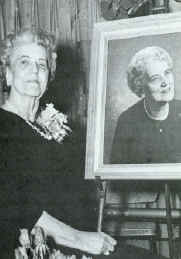 This was a remarkable woman.  Because she was not a namedropper, few people knew that she was a personal friend of Antoinette Perry, whose contribution to the Broadway stage is immortalized in the annual Tony Awards for dramatic performance.

Kathryn Randolph was so good at her craft that she served as dramatic coach for a Redpath Chautauqua troupe that included William Jennings Bryan.  Imagine being talented enough to give pointers to a man regarded as one of the greatest orators and platform performers of all time!

A great many Red Maskers privileged to have her as their mentor were convinced that she could have been one of the great ladies of the American stage, another Helen Hayes, had she chosen.

Instead, her preference was to be wife, mother, dramatic teacher to generations of Danville youngsters and incomparable director of more than 100 plays which delighted and entertained thousands of her friends and neighbors.

When Mrs. Randolph died, the Commercial News paid her tribute in a lead editorial.  Among other things, it said: "Parents who had studied dramatics under her wanted their children to have a similar experience -- not because of career ambitions but so that their lives might be enriched by contact with this gracious person."

And a past president of Red Mask, Jerry Ovall, expressed eloquently what was in all our hearts when he wrote:

"Red Mask Players has always reflected the character and integrity of its director, Mrs. Kathryn Randolph.  This great lady was not just someone we knew, but someone we loved.  Her work in our community will not cease but will continue through the organization that she built, the students that she taught and everyone whose life she touched."